Interracial dating in the media 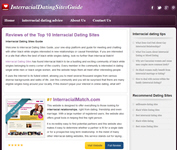 Its been years since Ive thought about The Fresh Prince of Bel-Air but a particular scene from the show was brought forcefully to mind when an aunt whispered in my ear; Your boyfriend is black! at Christmas last year. I pretended to be shocked, No way! and laughed it off but I didnt miss the confused look on her face as she tried to laugh along. I was reminded of the scene when the family first learns that Vivians sisters fiancé is white. You can see the surprise and awkwardness build with everyone tip-toeing around his race until Wills punch-line.

That is the first instance of interracial dating that I can remember seeing on television about . Mixed race couples have been pretty rare on TV until recently, with most shows today featuring at least one mixed race couple. Janice Smith in Fresh Prince was considered flighty and irresponsible and that sort of made her relationship appear irresponsible as well and for years most mixed relationships on TV were temporary. Today, however, from Modern Family to Scandal, from Quantico to Fresh off the boat, it appears as though nearly every show has at least one interracial couple. The same inroads have not been made in film; in fact, I cant name a single portrayal over the top of my head. Hollywood has increased the representation of homosexual couples though, but not in any major capacity.

The reason for this is probably its ideas about the demographics of cinema goers, as ticket sales remain the main earners for feature length films. Hollywood continues to sacrifice the quality of its plots to lure in viewers, the fact being evident from its obsession with sequels and a limpet like attachment to whatever happens to be drawing in the crowds (Benedict Cumberbatch or whatever young adult series happens to be on the best seller list). Numerous successful forays into uncharted territory (female super-heros, a diverse cast) have failed to show any consistent change despite the fact that actual demographics are changing faster than they ever have before

Perhaps this fossilization has more to do with the fact that movies are the oldest visual medium, rather like the grandfather who refuses to accept his childrens evolution into better things. Of course while we celebrate the increases diversity on our screen it is easy to over-look some of its most tenacious flaws; TV largely ignores how mixed race couples continue to be treated in the real world.

I have yet to see someone ask a white character what their parents have to say about their black partner or a Latino questioned about their citizenship status by their SOs family. These incidents are pervasive and a major feature of many of my conversations yet television manages to gloss over them all.

So, what? you ask. You have representation, now you want to play the victim too?

It isnt about victim-hood at all, it is about showing it like it is because it is only by portraying a problem that it can be recognized and solved. Interracial couples continue to experience a surprising amount a negativity over their interracial relationships and their decisions can only be normalized if they are portrayed in all their bitter-sweet glory.