Challenges of Interracial Dating in the 21st Century 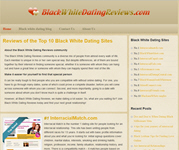 While you may have heard that a new sexual revolution is under way, the stubborn fact remains that many people are still having difficulty finding the kind of relationship they want. Not only are there timeless problems affecting them in the venue of dating, but there are also exclusively 21st century problems, some of which have to do with the Internet and its role in bringing people together, whether by choice or by happenstance. It's a good idea to consider some of the challenges as well as some of the solutions that can work.

Though it may seem that interracial relationships are something new, the truth is there has always been conflict in new races or communities of people intermixing. Much of the problem in ancient times revolved around the idea of becoming unevenly matched with a person of a different race  which usually meant a different religion. In the old days there was no international standard of Christianity or Islam or Judaism. Communities were associated with just one religion. Therefore, when lands became filled with multiple peoples, who each had their own faith, more animosity began and soon enough wars were fought. This reached a pinnacle when the slave trade ended.

However, many millennials today enjoy a more tolerant world and are able to explore interracial couplings without incident. Therefore, other common problems that affect all relationships may continue to appear. Usually these are problems in communication (especially partners giving each other the silent treatment or both partners acting sexually passive) or in lifestyle incompatibility. You might think that another person's age, social obligations or friends may not matter in the beginning. Until you realize that their time commitments may not be compatible with your lifestyle at all! Therefore, it's best to effectively screen your dates to avoid these problems now, in the beginning, before you become emotionally invested in someone who you can't work things out with.

The Internet has catapulted online dating into the mainstream, and now it's no longer just online dating sites or Craigslist, but even Twitter and Facebook are leading to numerous online romances that eventually blossom into real life marriages. The good news is that interracial dating is easier, thanks to search filters, profile pictures and location / interest matching.

However, there are still some challenges to overcome and one of these is in presenting an accurate image of yourself at the outset. While some people are forthright in creating a good online first impression, some people insist on disguising themselves. The idea of catfishing someone that a person likes, but can't work things out with in real life, is becoming more of a phenomenon now than ever before. The reason being that it is easier now to impersonate someone using selfies, voice chat and other digital technology. Unfortunately, some people exploit the gullibility of others. They may misrepresent their race, their gender, their body type. A little less trust and more logical steps in the screening process would do well in this regard.

Last but not least, the idea of people staring at an interracial couple is always a common complaint and sometimes the implied reactions of others can cause conflict between two lovers, when in actuality, only one partner is feeling pangs of guilt or paranoia. Don't let the prejudices of others, or indeed the suggestion of someone being racist, slow down your progression. The truth is, that sometimes such thoughts are self-defeating; invented by your own mind, as a reason to not pursue a relationship that you really want. Careful and thoughtful introspection works here. Not caring so much about what others think, but deciding what you want out of this particular relationship.

While there are always challenges to overcome, it is easier now than ever before to start interracial dating and make a real soul connection!